Through the use of ANSYS tools such as Additive Suite & Additive Print, paired with topology optimization capabilities in ANSYS Mechanical Workbench, the need for physical process of trial-and-error testing has been greatly reduced.

Join PADT’s Simulation Support and Application Engineer Doug Oatis for an exploration of the ANSYS tools that help to optimize additive manufacturing, and what new capabilities are available within them when upgrading to ANSYS 2019 R2. This presentation includes updates regarding:

If this is your first time registering for one of our Bright Talk webinars, simply click the link and fill out the attached form. We promise that the information you provide will only be shared with those promoting the event (PADT).

You will only have to do this once! For all future webinars, you can simply click the link, add the reminder to your calendar and you’re good to go!

It was my first time visiting New Orleans. I have heard many stories of how good the food is and how everyone is really nice there so I was excited to visit this city for a business trip. Stratasys Launch 2017! There was some buzz going on about some new FDM printers that Stratasys has been working on and I was really excited to see them and hear what sets them apart from the competition. Rey Chu (Co-Owner of PADT), Mario Vargas (Manager of 3D Printer Sales), Norman Stucker (Account Executive in Colorado), and I (James Barker, Application Engineer) represented PADT at this year’s Launch.

The city did not disappoint! I ate the best gumbo I’ve ever tried. Below is a picture of it with some Alligator Bourbon Balls. The gumbo is Alligator Sausage and Seafood. Sooooo Good!!

My last night in New Orleans, Stratasys rented out Mardi Gras World. That is where they build all the floats for Mardi Gras. They had a few dancers and people dressed up festive. I was able to get a picture of Rey in a Mardi Gras costume.

After dinner at Mardi Gras World, I took Rey and Mario down Bourbon Street one last time and then we went to Café Du Monde for their world famous Beignets. Everyone told me that if I come home without trying the Beignets, then the trip was a waste. They were great! I recommend them as well. Below is picture of Mario and me at the restaurant.

As you can see we had a fun business trip. The best part of it was the unveiling of the new FDM printers! Mario and I sat on the closest table to the stage and shared the table with Scott Crump (President of Stratasys and inventor of FDM technology back in 1988). These new printers are replacing some of Stratasys entry level and mid-level printers. What impressed me most is that they all can print PLA, ABS, and ASA materials with the F370 being able to print PC-ABS. You also can build parts in four different layer heights (.005, .007, .010, and .013”), all while utilizing new software called GrabCad Print.

GrabCad Print is exciting because you can now monitor all of you Stratasys FDM printers from this software and setup queues. What made me and many others clap during the unveiling is that with GrabCad Print you no longer have to export STL files! You can import your native CAD assemblies and either print them as an assembly or explode the assembly and print the parts separately.

Everyone wants a 3D Printer that can print parts faster, more accurately and is dependable. You get that with the family of systems! Speed has increased big time, they are twice as fast as the Dimension line of FDM printers. Stratasys has published the accuracy of these new printers to be ±.008” up to a 4 inch tall part and then every inch past 4 inches, you add another .002”. These machines are very dependable. They are replacing the Uprint (Uprint SE Plus is still current), Dimension, and Fortus 250 machines that have been workhorses. Many of our customers still have a Dimension from 2002 when they were first launched. In addition to the 43 existing patents that Stratasys has rolled into this phenomenal product, they have an additional 15 new patents that speaks volumes as to the innovation in these 3D printers.

Stratasys Launch was a blast for me. Seeing these new printers, parts that were printed from them, and understanding why these are the best FDM printers on the market was well worth my time! I look forward to helping you with learning more about them. Please contact me at james.barker@padtinc.com for more information. If you would like to hear my recorded webinar that has even more information about the new F170, F270, and F370, here is the link.  Or you can download the brochure here. 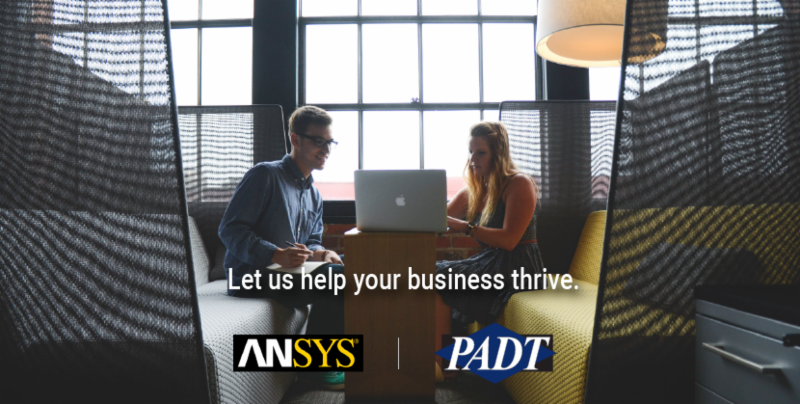 Do you work for a startup of know someone who does?

PADT would like to invite you to attend our upcoming webinar in support of the ANSYS Startup Program.

Join us as our own Co-Owner and Principal Eric Miller discusses how simulation software is helping new entrepreneurs and startup companies alike to shorten their time to market and reduce their manufacturing costs.

While many startups tend to avoid using simulation due to cost or a lack of accessibility, this is a key aspect of the modern manufacturing process and should not be ignored.

As a partner in the Startup Program, you will gain instant access to ANSYS solutions so you can start building virtual prototypes of your new products. These virtual prototypes can be modified and tested with simulation hundreds of times in the same time it would take to build and test one physical prototype – saving you time and money as you work to perfect your product design. The partnership gives you access to the full portfolio of multiphysics simulation bundles, including the Structural and Fluids bundle and the Electromagnetics bundle.

Have an idea for a product and feel like you need a prototype.Tishin Donkersley  from the Arizona Tech Beat asked me over to their offices to do a short interview and share some pointers on the subject.  Take a look at the result here.

I talk about trends in the 3D Printing world that impact startups who have a need for prototypes, and share a few pointers on getting a prototype made.

While you are there, take a look around the sight.  AZ Tech Beat is one of the best places to find out what is going on in the Arizona Tech Community as well as in tech in general.   I especially like their gadget updates.

After working with the mining industry in Arizona for years, we have finally gotten around to joining the two professional groups that work with the industry: Arizona Mining & Industry Get our Support, better known as AMIGOS, and the Arizona Mining Association.  We are excited about being able to contribute more to the Arizona mining community through these two groups.

Mining is still a dominant industry in the state, especially copper mining with the state providing 68% of the copper produced in the US in 2011.  PADT has supplied software and hardware to both large multinational mining companies, equipment suppliers, and small consultants.  We have also provide simulation of mining processes and airflow in mines to several companies.  With the addition of Flownex to our product and services offering, our involvement with the industry has grown even more.

But, to be honest, by far and away the coolest part of being involved with mining in all of the states we work in is when we get to go visit a mine, or get to look up close at the huge equipment our customers make.  This is some cool engineering.  We plan on doing visiting new mines and exploring more equipment as we get more involved with these groups.

Let the people who write "The Focus" train you and your team. Check out our schedule or contact us to set up a class at your place or something custom.

Learn APDL with this workshop based book written by PADT's Technical Support Team. The new and improved Second Edition contains additional chapters on APDL Math and APDL in ANSYS Mechanical.

Now available on Kindle as well as paperback